Jammu to Pahalgam (315 km) - The distance between Jammu to Pahalgam can be covered by taxi / buses which are available at Tourist Reception Centre, J & K Govt., Raghunath Bazaar only early in the morning. Another option is going to Srinagar by air and then proceeding to Pahalgam by road. 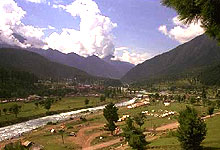 Situated 96 Kms from Srinagar, Pahalgam is known all over the world for its beauty. Lidder and Aru Rivers and high mountains kiss the valley. Good Hotels are available for accommodation. Arrangements for free Langars (food kiosks) are also made by Non Government Organisations at Nunwan Yatri Camp, 6 kms. short of Pahalgam. Pilgrims camp at Pahalgam for the first night.

As the Yatra proceeds further from Chandanwari one climbs a height to reach Pissu Top. It is said that to be the first to reach for darshan of Bhole Nath Shivshankar, there was a war between Devtas and Rakshas. With the power of Shiv, devtas could kill the rakshas in such large number that the heap of their dead bodies resulted in this high mountain.

Sheshnag – is actually a mountain which derives its name from its Seven Peaks, resembling the heads of the mythical snake. The second night's camp at Sheshnag overlooks the deep blue waters of Sheshnag lake, and glaciers beyond. There are legends of love and revenge too associated with Sheshnag, and at the camp these are narrated by campfires. The stillness of the Himalayan night increases your inner joy. Once you take bath and enjoy the scenic view, life takes a whole new meaning altogether.

From Sheshnag one has to climb a steep height across Mahagunas Pass at 4276 mtrs.(14000 ft) for 4.6 Km and then descend to the meadow lands of Panjtarni at a height of 3657 mtrs (12000 ft). Due to cold harsh winds it is strongly recommended that Yatris should carry their quota of Woolens and Vaseline! Some Yatris are also affected by deficiency of oxygen. Some may get the feeling of nausea. Dry fruits, sour and sweet eatables like Lemon appear to control these symptoms but it is best to contact the nearest medical post immediately. The route to Mahagunas is full of rivulets, water falls and springs. At Panjtarni, at the feet of BHAIRAV MOUNT, Five Rivers flow which apparently originated from Lord Shiva's Hair (Jataon). Pilgrims camp at Panjtarni on the 3rd night.

On the way to The Holy Cave, one comes across the Sangam of Amravati and Panjtarni rivers. Some pilgrims take bath at Amravati near the Holy Cave before going for Darshan. There are two smaller Shivlings one of Maa Parvati and other of Shri Ganesh. It may be noted that after having early Darshan of the Shiv Linga at Holy Cave, one can return to Panjtarni well in time the same day.